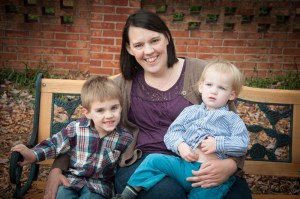 This is the house we used to live in.

This is the house that my husband’s ex-wife picked out for the two of them to begin their married life together.

I have never liked that house.

I very often hated that house.

But I did move into that house to live with Aaron, before we were married - just too anxious to get out of my Mama’s house.  ;-)

I did bring both my boys home from the hospital to that house.

Both of my boys learned to walk and talk and run and leap and jump and yell and scream  in that house.

There was a lot of noise in that house, boys running, jumping, leaping, yelling and screaming; a Mama and a Daddy who sometimes yelled and screamed at one another too.

Doors were slammed and things were thrown.

But much louder than the noise was the silence in that house - the cold shoulders, silent tears, and time that would pass without a single word passing between Mama and Daddy.

Once, in this driveway, my baby boy was in his infant carrier as his Daddy and I played tug-of-war, over our child.

I told myself that most marriages, behind closed doors, weren’t all that different from ours.

But that life, the living that occurred in that house, was before I invited Christ into my heart.

The life I was living was nothing compared to the life He has given me.

On that day, almost two years ago, sitting at my desk at school, my heart was changed.  I came home that evening and, after years and years of silence, I began to speak to my husband.

I came home to that house, the house that I so often hated, and I sat on the couch with my husband and began to speak.

But, I can look back now and see that Jesus was already whispering His words of love and obedience into my heart.  I think I knew that if I were going to truly follow Christ I would have to change everything about the way I had been living.

So that house is the home I came to, where I sat on the couch with my husband after years of silence, years of building and fortifying the walls around my heart.  These walls were tall, foreboding, impenetrable, built over time with bricks of anger, resentment, bitterness, and hurt.
But I knew that he would need to know.  Somehow, even then, I knew that a first step toward following Jesus was to invite my husband along the journey with me.  I told him what had happened and I told him that I would be attending church.  I told him he was welcome to go if he wanted but he didn't have to - I would go with or without him.  I’m not proud of it, but I know I was making sure to let him know that I didn’t need him, that I didn’t really care what he did, but that this was what I was doing.
That night, the night that I shared with my husband the gift of my salvation was one of the first times we had physically touched in any way in months.

We started attending church, I started reading my Bible and I began to pray asking God to tear down the walls of my heart and to give me love, specifically, to give me love for my husband.

And slowly the anger, the bitterness, and the resentment that I had spent years storing up within my heart, began to melt away.

Our home became happier, lighter, more joyful, and full with the life that Jesus promises.

But, even with Christ, our stories don’t often end with “happily ever after.”

A little more than a year after I had given my life to Christ, one evening, when my husband went out for groceries and left his phone behind, I discovered things that no wife wants to find.  I realized my husband had been leading a double life and I had no idea.

That house became the place where I quietly and resolutely confronted my husband with the cold, hard evidence and he completely denied any wrongdoing.

That house became the place where I gathered friends and family and I asked my husband to leave.

That house became the place where my friend’s husband changed the locks so that my own husband would not be able to get back in.

That house became the place where at night, after I had tucked my boys into bed, I locked myself in the bathroom, but on my worship music and lay on the floor crying and praying to God.

But God did meet me there in that bathroom floor in that house that had never really felt like my home.

God had made his home within me and with Him I found loving arms to support and to comfort, to hold me together as my world fell apart around me.

And my God, as He held me, He continued to work on and in  my heart - to tear down walls, to melt away the ice that I hadn’t even realized still existed.

I considered divorce.  I saw a lawyer.  I would have had a “great case” for lots of child support.  It would have been so easy to walk away.  I had every right to.

I knew, for myself and for my boys, I had to give the marriage one more chance.  I could not trust my husband to remain faithful but I had to trust my God.  I knew that if something happened again it would not be God’s “fault”, it would not mean I had been wrong to stay but I knew I had to give it a chance.

And the only way that I was able to stay, to allow my husband to come back home, was to offer him the grace, mercy and forgiveness that Christ had offered to me.

During the brief time we were apart, my husband also accepted Jesus Christ as his Savior.  If his secret had not been discovered, if I had not asked him to leave, he may still be lost today.

I feel that, once he gave his heart to Christ, that was the moment our marriage really began.

We are still far from perfect …. far from perfect!!  …..  but, as I come upon the two year anniversary of giving my life to Christ, and I think back to that night almost two years ago, sitting on that couch in that house that I hated, telling my husband what Christ had done for me;  I realize we don’t live there anymore - both literally and figuratively

You see, we now have a new house.

We now have a home that we are making our own.

A house full of two wild and crazy boys, a little dog that we love dearly even if she does poop and pee and vomit everywhere, lots of dirty clothes and dishes, and even more legos.

But it’s our home.

A home where, in the past six months of living here, we have sat down to eat as a family more that we did in all the combined years of living in our previous house.

A home where we have roasted marshmallows over our brand new fire pit and camped out in our backyard.

A home where I will soon be hosting my second ever Bible study in my very own living room.

A home that, truly, the Lord has provided.

And, as I sit this morning, writing at our new dining room table, with the sliding glass doors and view of the backyard to my left, the pooping dog, Chili dog curled up at my feet,  my son playing on the ipad on the couch just a few feet away …..

As I think of the way our house used to be, used to feel, the space that we used to exist in and
I thank God for the way He provides.

I thank God that we don’t live there anymore.

Author Bio
My name is Tara.  I am a mama, a wife, a teacher, a sister, a daughter, and most importantly a follower of Jesus and a child of God.

I have two little boys who love to run and jump and yell and scream and seem to love being attached to their Mama; Smith who is 6 and Charlie James who is 3.  I have also been blessed with a “bonus” child, my stepdaughter Kaleigh, who just turned 12 and does her best to tolerate the antics of her little brothers.

My husband, Aaron, and I have been married for 7 years and we have definitely seen God at work in our marriage.  Every day we are learning that, in order to have a successful marriage, we must have God as our foundation.

Story of My Heart.


I will give you a new heart and put a new spirit in you; I will remove from you your heart of stone and give you a heart of flesh.


(This post was written by Tara Blake as a part of the Our Heart's Song Blog Series this month. I encourage you to read her story and check out her website. This is one of the many incredible women that I had the privilege to meet at the SheSpeaks Conference I attended in July.)
Posted by Michelle at 6:04 AM