This post was originally written for a website called Sweet Jesus Ministries that I am a monthly contributor for. I hope you are blessed and encouraged to read this during your own season of transition.

But the Lord said to her, “My dear Martha, you are worried and upset over all these details!
There is only one thing worth being concerned about. Mary has discovered it, and it will not be taken away from her.
Luke 10:41-42 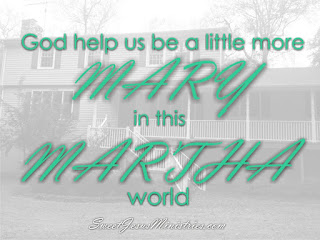 So here I sit convicted… again.

Not of some great sin, or something I said or did. More like something I didn’t do. When we moved into this much bigger house in North Carolina from Texas, we bought the extra square footage for a reason. I had always hoped to be a hostess. A hostess for my friends and family when they came to visit me and a hostess for bible studies, ladies groups, or my friend’s kids. I wanted to be the house that everyone went to. The house that was warm and welcoming to anyone at anytime.

But the extra square footage meant extra cleaning. The 1970’s house didn’t have all the ugly wallpaper off yet. The brass fixtures were still everywhere you looked. The yard still needed help from someone with a much greener thumb than I had. Sure we had done a lot to the house since we moved in, all new floors, repainted several of the rooms downstairs and bought new furniture. But I felt like it wasn’t enough. I was afraid of being judged on the rooms still left to be remodeled and they would stick in their minds greater than the rooms that had been finished.
I know…I have issues...(Read more here)