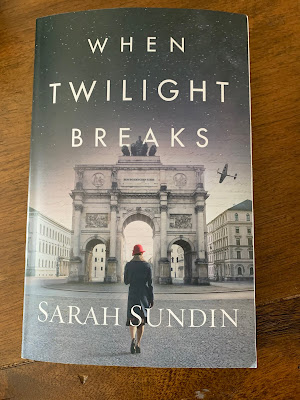 I was first introduced to Sundin's work through my church library. I started with her "Sunrise at Normandy" Series about three Texas brothers whose path led them all to participate in one way or another in the battle of Normandy. It was such a fantastic series and each book really stood out alone. When the opportunity came with Revell Reads to be a first reader for her latest, "When Twilight Breaks" book that came out this month, I jumped at the opportunity!

The best thing about this novel is that it makes you want to bust open a history book (or do a simple Google search) to research and look up some of these historical events that are brought to life in the story.

You can tell Sundin does her research- from what the characters wear, to how they style their hair, to the kinds of cars driven in the era.

What I thought was most interesting is that this book is set in 1938 which is Pre- World War II. It explores so much about the thoughts, feelings, and emotions from those who sympathized with Hitler and the Nazi's and those of the Jews when the anti-semitic laws began to become more frequent and more harsh.

I highly recommend this book as a fantastic exploration of this time period that explores love, history, war, and faith in God when it is put to the ultimate test.

From the back cover:

Evelyn Brand is an American foreign correspondent determined to prove her worth in a male-dominated profession and to expose the growing tyranny in Nazi Germany. To do so, she must walk a thin line. If she offends the government, she could be expelled from the country--or worse. If she does not report truthfully, she'll betray the oppressed and fail to wake up the folks back home.Peter Lang is an American graduate student working on his PhD in German. Disillusioned with the chaos in the world due to the Great Depression, he is impressed with the prosperity and order of German society. But when the brutality of the regime hits close, he discovers a far better way to use his contacts within the Nazi party--to feed information to the shrewd reporter he can't get off his mind.As the world marches relentlessly toward war, Evelyn and Peter are on a collision course with destiny.

Get your copy today at Amazon or your favorite online retailer, or click here!

I was given a free copy of this book to review from Revell publishing in exchange for my honest review.