When God Doesn't Turn it Around

When Mary came [to the place] where Jesus was and saw Him, she fell at His feet, saying to Him, "Lord if you had been here, my brother would not have died."

This season of Covid has lasted entirely too long if you want to ask my opinion. I don't think that any of us would have ever thought it would have been something we would still be talking about and wearing masks for a year after first hearing about it.

I call it a season because although it feels unending, it will end. People will remove the masks, go on vacations, and move on with their lives. It will become one of the events in human history that will be in the history books for our grandchildren to read about one day.

But for some people, including me, its presence is going to be felt the rest of my life. January 29, 2021, my father passed away from Covid pneumonia. He battled it valiantly for about 30 days. It came as a complete and utter shock to the entire family. He was healthy, had no pre-existing conditions, was not overweight, was in his mid-60's and never even had pneumonia before.

Although I am still struggling with enormous grief, I can find some consolation in God's word that so many people in the Bible, including Jesus himself, were no stranger to.

In the book of Job you read about him finding out about losing his livestock and his children all at the same time; "At this, Job got up and tore his robe and shaved his head. Then he fell down to the ground in worship..." Job 1:20.

This was Job's first response to grief. I can honestly say this was not my first response. I was a lot more like Mary, weeping and  telling God He could have healed my daddy if he had wanted to. I was standing next to my Dad when he was here one moment and then another he was gone. I, like Mary, fell to my feet in tears in the hospital room.

I have lost grandparents that were near and dear to my heart, but I have never felt a loss like this before. I can barely even describe what it feels like.

Although I lost a father who I loved very much, I did come to the realization that my Heavenly Father does love me and He loves my earthly father. He has both mine and my daddy's best interest at heart, and to that I cling too.

My dad was a believer and I do have hope and reassurance that I will see him again. I do believe that this was another form of healing for my Father and know that when he got to meet His maker, see his father, mother, and sister who passed before him, it was such a sweet reunion.

But, I also can't deny that what was heaven's gain was my loss. So I began to search the scriptures for hope in this difficult time and came across Isaiah 53:5, "He (Jesus) was despised and rejected by mankind, a man of suffering and familiar with pain."

I then went on to read the rest of the story of Mary, Martha and Lazarus when he (Lazarus) had passed and Jesus arrived and both Mary and Martha confronted him. It goes on to say: "When Jesus saw her sobbing, and the Jews who had come with her also sobbing, He was deeply moved in spirit [to the point of anger at the sorrow caused by death] and was troubled, and said "Where have you laid him?" They said, "Lord, come and see." Jesus wept" John 11:33-35 (AMP).

Although this story in the Bible has a happy ending (Jesus does raise Lazarus from the dead), I pause here to tell God thank you for something. I know Jesus had many purposes in doing what He did in this story: waiting 4 days before coming to see about Lazarus after hearing he had fallen ill and then choosing to raise Him. But, what I thank Jesus for in this story is that for a moment, he stepped into the grief and allowed that loss to wash over him and experience it, feel it, weep over it, and see what it did to the family and friends that deeply loved Lazarus.

This makes Jesus relatable. This makes me come to him with my anger, my hurt, my grief, and my questions. He hears me, He sees me, He understands. He cries with me, He holds me, He carries me at times when I feel too weak to go on. When Job's friends came to comfort him after tragedy struck his home, "...they sat on the ground with him for seven days and seven nights. No one said a word to him, because they saw how great his suffering was" Job 2:13. 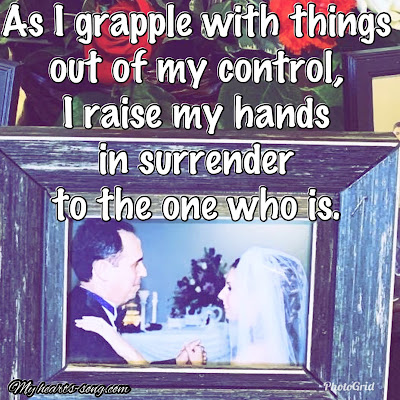 Sometimes I just sit with God, because I have no words and He is ok with that. God didn't turn my situation around like I would have hoped. I did pray for healing in my dad's body, He just chose to heal him in Heaven. As I grapple with things out of my control, I raise my hands in surrender to the one who is.

My grace is sufficient for you, for my power is made perfect in weakness. Therefore I will boast all the more gladly about my weakness, so that Christ's power may rest on me.

When my family and I were praying and interceding for my daddy's healing, there was a song on my heart that I sang in the car and even in the hospital room. It became my anthem during the most difficult time of my life.

"God, Turn it Around" by Jon Reddick is a powerful song. For a while I couldn't listen to it after my dad passed, but it's words do still ring true. There are still so many out there grappling with loved ones who have COVID and this is why I share this song and write these words, because someone besides me needs to hear them.

Even if God doesn't turn our situations around or bring the healing we pray for, may we still be bold in our faith like Shadrach, Meshach, and Abednego and say, like they did when their faith was tested,

"our God whom we serve is able to rescue us from the furnace of blazing fire, and He will rescue us from your hand, O king. But even if He does not, let it be known to you, O king, that we are not going to serve your gods...” Daniel 3:17-18 (AMP)