Book Review: "Beyond the Tides" by Liz Johnson 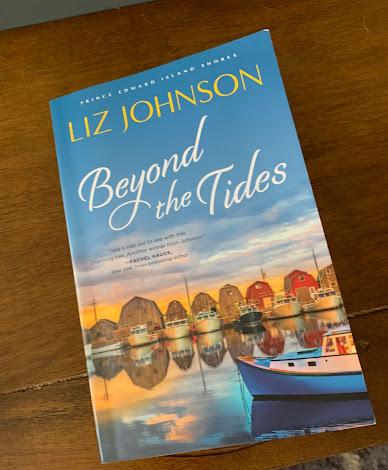 I am a big fan of books and most of the time I read pretty heavy things like World War II fiction or stories of people surviving harrowing ordeals like human trafficking. Survival stories inspire me, and I love hearing how people overcome some of life's hardest struggles.
But every once in a while, I like to sit and get lost in a book that is more on the lighthearted side. This is similar to a Hallmark movie but has a lot more depth to the characters. Meg and Oliver are forced to work a lobster boat while Meg's father decides who gets the business at the end of the season. Will it be Meg, his only daughter, that doesn't want to lose their family legacy? Or will it be Oliver- long time and loyal deckhand who always wanted his own fishing boat?
Besides the budding love story, a bigger story emerges- one about forgiveness and how important it is to give people second chances and remember the old saying "Hurting people hurt people". As Meg and Oliver work the boat together, they learn a lot more about each other and their family members that puts the boat competition in a different perspective altogether.
I won't spoil it for you, but I really enjoyed wrapping up my summer reading with this great book. It is book one of a series and I am interested to see what will happen next on Prince Edward Island. Get your copy here.
From the Back Cover
"When Meg Whitaker's father decides to sell the family's lobster fishing business to her high school nemesis, she sets out to prove she should take it over instead. Though she's never had any interest in running the small fleet--or even getting on a boat due to her persistent seasickness--she can't stand to see Oliver Ross in charge. Not when he ruined her dreams for a science scholarship and an Ivy League education ten years ago.
Oliver isn't proud of what he did back then. Angry and broken by his father walking out on his family, he lashed out at Meg--an innocent bystander. But owning a respected fishing fleet on Prince Edward Island is the opportunity of a lifetime, as well as a way to provide for his mother, and he's not about to walk away just because Meg wants him to.Meg's father has the perfect solution: Oliver and Meg will work the business together, and at the end of the season, he'll decide who gets it. Along the way, they may discover that their stories are more similar than they thought . . . and their dreams aren't what they expected."

I received this book for free from Revell Reads in exchange for my honest review.